Bitcoin Mining vs Trading Bitcoin as a CFD 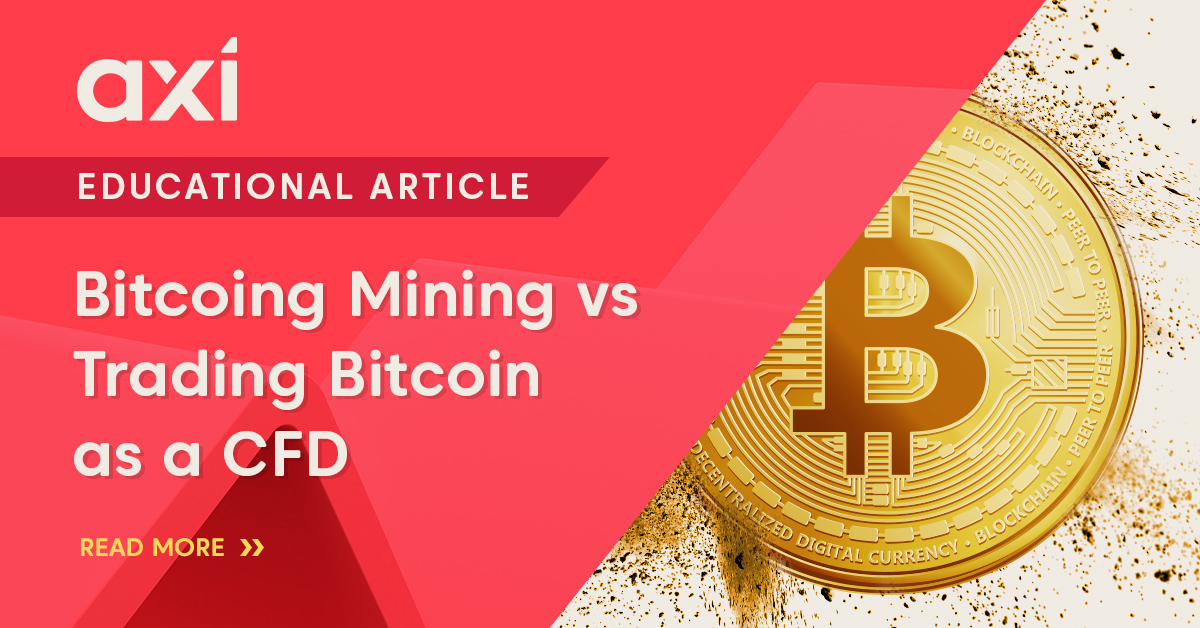 Bitcoin is a digital currency that was created in 2009, and is an example of a cryptocurrency. While there are many cryptocurrencies that are available today, such as Litecoin, Ethereum and even Doge coin, Bitcoin is by far the most popular. But what exactly is Bitcoin?

To answer this question, we need to have a better understanding of what a cryptocurrency is. Cryptocurrencies are digital currencies and serve as electronic payment systems, used to purchase goods and services. In other words, you can use real money, exchange them for a cryptocurrency, and then spend that cryptocurrency on things you want to buy. Think of them as tokens you get at an arcade, except that these are virtual tokens that exist only on the Internet.

Bitcoin is one example of a cryptocurrency that exists only in the digital world. They function via a technology known as blockchain (wait, block-what?).

To fully appreciate what Bitcoin is, we need to understand how blockchain technology works. You see, there are no physical bitcoins, only a public ledger that records any and all transactions of Bitcoins that occur and are verified by a massive amount of computing power. Think of a public ledger as a huge book that has a list of all Bitcoin transactions that are made. Every time a new transaction is made, it is broadcasted to all computers within the system, who must verify the transaction (through complicated mathematical algorithms that we won’t trouble you with). Once this transaction is verified, the book is updated and broadcasted to all computers in the system.

Knowing the basics of the forex market will give you a solid foundation where you can build your skills, trading strategies and even work towards a successful FX trading career – so let’s dive in!

Why is Bitcoin so popular?

Got all that? Well, that’s basically a simplified explanation of how blockchain technology works! This is the basis of how Bitcoin functions, as well as many other cryptocurrencies. If you realise, this system is essentially decentralised, with no need for a central entity like a bank or credit card company. What this also means is that there are much lower fees compared to steep fees charged by banks for wire transfers. This makes it much easier and cheaper for two parties to directly exchange funds.

Apart from being able to easily engage in low cost transactions through Bitcoin, the allure of Bitcoin as a result of its decentralised model meant that no one entity is able to control the supply of Bitcoins or reverse a transaction, which helps to reduce fraud concerns for merchants running online businesses. Finally, the decentralised model that the blockchain technology operates on also translates to greater security as the mathematical barriers make it extremely tough for someone to fraud a transaction block. Think of it like how everyone owns a book that records these Bitcoin transactions, hence, a majority of these owners' books would have to be updated in order for the fraud transactions to be recognised, thereby lowering the risks of any fraudulent records. Amazing, right? Many view Bitcoin, and the blockchain technology that powers it, as the future of monetary exchange.

What are Bitcoin CFDs?

Bitcoin CFDs, or contracts for differences, are financial products that allow you to benefit from the volatility that exists in the market for Bitcoin. The main difference in trading with CFDs is that there is no need to physically (or in this case, virtually) own the asset that you are trading. In such a case, there is no need for you to own any Bitcoin at all if you were to trade Bitcoin CFDs (unlike when you trade on a cryptocurrency exchange). Remember - when trading CFDs on Bitcoin, you are essentially only speculating on the price fluctuations of Bitcoin.

Bitcoin CFDs function on leverage, which allows one to open a larger position on margin. This means that your profits are magnified when the price of Bitcoin moves in your favour, but it also means that your losses are also larger if Bitcoin’s price moves against you.

What are the advantages/disadvantages of trading Bitcoin vs Bitcoin CFDs?

Bitcoin CFDs allow you to participate in the Bitcoin market without having to physically own any Bitcoins. Hence, there is no need to own a cryptocurrency storage wallet or even be involved in the Bitcoin exchange. Bitcoin wallets are highly vulnerable to hacking attacks and theft which means that we could lose our Bitcoins all at once. That is the danger of having a cryptocurrency storage as once your wallet is hacked and the Bitcoins residing in it stolen, there is no way to recover your Bitcoins anymore. This is because cryptocurrency exchanges do not provide SIPC of FDIC insurance in the event of loss of any cryptocurrency. If you want to stay clear of such risks, it makes sense to access the potential of Bitcoin through trading Bitcoin CFDs instead.

Cryptocurrency exchanges tend to be confusing and complex, which may be difficult for new traders to grasp. The fact that Bitcoin is unregulated and rid of a central regulatory body also means that traders trading Bitcoin are exposed to fraud and malpractice.

However, trading Bitcoin CFDs with Axi allows you to avoid all the complexity and danger that exists in such exchanges as we provide a single bespoke price for Bitcoin. With reference to the diagram below, we can see how competitive Axi’s Bitcoin prices match those on other mainstream cryptocurrency exchanges. Apart from its competitive pricing, Axi provides 24 hours a day, 5 days a week support when you trade Bitcoin CFDs, and all transactions made with Axi are traceable and regulated. With Axi, you can trade Bitcoin to the best of your ability with peace of mind!

Compare these prices with what we offer when trading Bitcoin CFDs below. You will find that Axi offers highly competitive (and often, even better) prices as compared to the prices that are trading on the most popular Bitcoin exchanges. 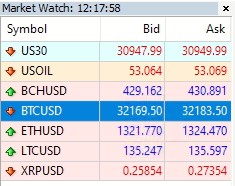 At the same time, trading Bitcoin CFDs with Axi allows you to trade on the highly popular MT4 platform. Here, you can use custom indicators that you traditionally won’t be able to find on most cryptocurrency charting platforms, or even automate your trading with popular trading robots via Expert Advisors (EAs). By trading Bitcoin CFDs this way, you can easily deploy your favourite trading strategies on Bitcoin in a quick and simple way.

Trading with leverage also incurs a higher level of risk, as both your gains and losses are magnified. This means that, while the opportunity of making greater returns while trading Bitcoin CFDs certainly exists, the possibility of incurring greater losses is just as real. This is especially so in speculative markets such as cryptocurrency markets, where price can be highly volatile. Hence, it is important to practice good risk management when trading Bitcoin CFDs.

Now that we have explored the wonders of trading Bitcoin and how accessible it is to us as retail traders, let us look at how we can execute our Bitcoin trades via our MT4 platform here: 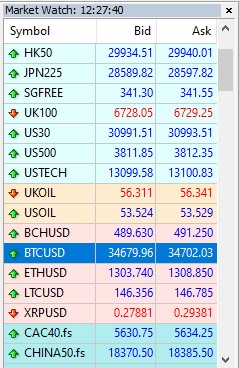 Now that you have located the BTCUSD symbol, we are one step closer to executing our Bitcoin trades. In order to do that, simply hover over the symbol, right click and select “New order”. This would bring up the order window which allows us to key in our market or pending orders for our Bitcoin trade.

What are the crypto CFD products offered by Axi?

Hopefully this provides some clarification over the differences between Bitcoin mining and trading bitcoin as a CFD! Stay tuned for the next article as we cover more topics on cryptocurrencies!

What is the difference between the cash and futures market?

If you are looking to trade financial assets as CFDs you will need to understand the difference between the cash and futures market.