Home / Blog / Education / Blockchain / What is the Metaverse

What is the Metaverse? The future of the internet 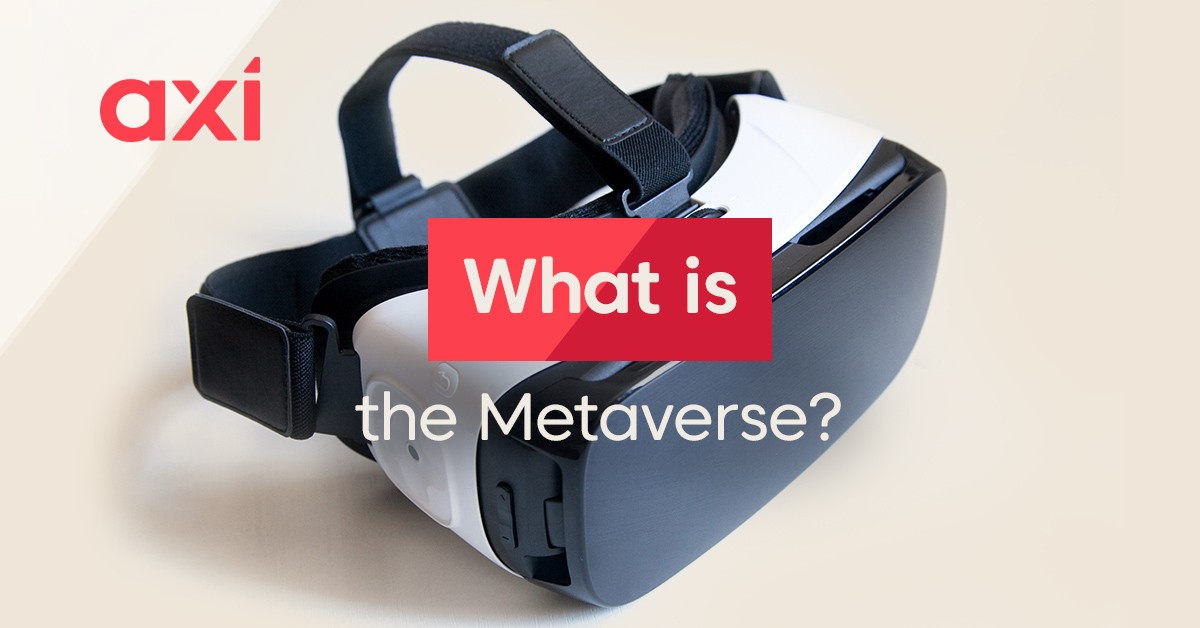 When Mark Zuckerberg announced that he’s turning Facebook into a metaverse company and changed the company’s name to Meta, the metaverse quickly became one of the hottest topics in tech.

But what is the metaverse, and why is there such hype around it?

Read on to learn what the metaverse is, why it’s so hyped, and how you can invest in it.

What is the Metaverse and how does it work?

While the metaverse might sound like a new concept for many, it actually isn’t. The metaverse has been the acme of many Sci-Fi novels and films, such as ‘Snow Crash’, ‘Tron’, and ‘Ready Player One,’ among others.

Author Neal Stephenson is credited for having coined the term “metaverse” in his novel ‘Snow Crash,’ which was published in 1992.

The metaverse is anticipated to be the next phase of the internet, converging augmented reality, virtual reality, and extended reality to allow people to work, socialise, and play.

Simply put, the metaverse is a digital world that has places and things like the physical world and is populated by real people who are represented by avatars.

While the metaverse is still in its infancy stage, many believe that its potential will far exceed anything we have experienced thus far. Its development is tied to Web 3.0 – the next phase of the internet – which will incorporate blockchain technology, digital currencies, and non-fungible tokens (NFTs).

The mix of all these technologies is expected to significantly impact the world. Bloomberg anticipates that the metaverse’s market will grow to $800 billion by 2024. This denotes how lucrative the metaverse could be in the near future.

Why you should care about the metaverse

While the metaverse isn’t fully developed just yet, many experts agree that it will shape the future of society.

Many futurists, technologists, and investors believe that the metaverse will be the next big thing. Similar to how the internet changed the world, the metaverse may have more impact than that.

Microsoft, Disney, Unity, and Epic Games are some of the companies besides Facebook that are investing money and talent into building this new digital realm.

What will we be able to do in the metaverse?

Moreover, the metaverse will also lead to the creation of a thriving virtual economy. Even though the metaverse is still in its infancy, early examples that are already in existence have shown its financial potential.

Given that the metaverse is an extension of the real world, humans will be able to receive and offer similar experiences to what we currently have in the real world.

For example, investors can purchase a plot of digital land in the virtual world, Decentraland, and earn an income by renting it out for a monthly fee. Additionally, artists can showcase their digital artwork in the metaverse and have people purchase them using cryptocurrency.

How can you invest in the metaverse?

You can already invest in the growth of the metaverse through the purchase of metaverse stocks, metaverse tokens, and NFTs in virtual worlds.

A range of publicly traded companies are exploring the metaverse, with Meta arguably being the most metaverse-focused.

Alternatively, you can purchase the digital tokens of the most popular early metaverse adaptations, such as Decentraland. NFTs provide another avenue to invest in the metaverse. Virtual land and property in blockchain-powered virtual worlds, for example, have seen a substantial increase in value in 2021 as crypto-savvy investors are positioning themselves for the growth of the metaverse.

Let’s take a look at three metaverse investments you could make today.

Following the recent name change from Facebook to Meta, the social media giant company is planning to change its name from Facebook, under the stock ticker FB, to Meta with the ticker MVRS.

Given its acquisition of Horizon and Oculus, Facebook is already leading the way when it comes to developing and shaping the metaverse, so buying the stock or trading Meta share CFDs would be a way to add metaverse exposure to your stock portfolio.

Decentraland’s MANA is a metaverse token that should rank high in your list of metaverse tokens that you can invest in. Decentraland is a blockchain-powered virtual reality platform that allows users to play games, buy land, and host events, all while interacting with each other.

MANA is Decentraland’s main token that is used to purchase LAND (NFTs that represent ownership of virtual real estate in Decentraland) as well as pay for other virtual goods and services on the platform.

Another exciting metaverse token that you could invest in is the Metaverse Index, represented by the ticker (MVI). The MVI token was developed to showcase the business trends of companies in various sectors migrating to virtual worlds. Think of the MVI token as a crypto index fund that invests in metaverse projects.

People who invest in the MVI token get exposure to various tokens from different crypto projects that cut across various sectors such as NFTs, online gaming, and virtual worlds.

When is the metaverse coming and is it overhyped?

Although the metaverse is still in its initial development phase, fragments of it are already in existence.

Online multiplayer games, such as Fortnite, Roblox, and Minecraft, have built platforms that have made social gaming a popular phenomenon, creating the groundwork for the metaverse.

And while most people think the metaverse is all about playing games, that’s far from the truth. While there’s no denying that online games have been the starting point of the metaverse, the metaverse itself has so much more to offer.

For instance, The Sandbox partnered with Snoop Dogg to recreate his real-life mansion. Fortnite has hosted concerts with Travis Scott and Ariana Grande, while Roblox partnered with Lil Nas to host a concert that got 33 million views. These, of course, are just a few examples.

Even though it’s not fully developed, is the metaverse overhyped? The simple answer is no.

When cryptocurrencies became “a thing” a few years back, many didn’t believe that they would still be around by now. More than a decade later, however, cryptocurrencies are still here and are even expected to play a critical role in the metaverse.

So, no, the metaverse isn’t overhyped. While there may be lots of sceptical headlines, the investments that are being made paint a clear picture that something big is coming.

Facebook has so far invested $50 million into its metaverse projects. In April, Epic, a US game design company, raised $1 billion to support its vision for Epic and the metaverse. Epic received a strategic investment from Sony Group Corporation.

The Sandbox raised a $93 million Series B funding round led by SoftBank that will help the company in its efforts of building an open metaverse. While some investors are taking a wait and see approach, others are already investing heavily.

Whether it will take five, ten, or twenty years before we all work, live, and play in the metaverse, it is difficult to predict. What most people seem to agree on, however, is that it's coming, and forward-thinking investors are betting big on it.

Examples of the Metaverse

Although we still don’t have a single metaverse that is linked together, we have existing standalone metaverse projects and platforms that paint a picture of what the metaverse will eventually look like.

Below are three examples of the metaverse, powered by blockchain technology.

Axie Infinity is an online play-to-earn game that provides players with an opportunity to make some income. The game has two digital tokens, AXS and SLP, operating on the Ethereum blockchain. In the game, players are able to breed, raise, and battle digital pets known as Axies.

Players are not only able to vote but also shape the direction of the game. Additionally, if you own the AXS tokens, you can stake your tokens to earn passive income. Alternatively, players can also win battles in the game and earn the SLP token, which they can then sell in the open market.

Decentraland is a virtual reality platform operating on Ethereum that incorporates social elements with digital currencies, virtual real estate, and NFTs. Currently, it’s the largest virtual world in the NFT space and uses MANA as its native token.

LAND on Decentraland is represented as an NFT and each parcel measures 16 metres by 16 metres. These pieces of LAND can be purchased using the MANA cryptocurrency. Users can buy, sell or rent out their parcel of LAND via an NFT marketplace. 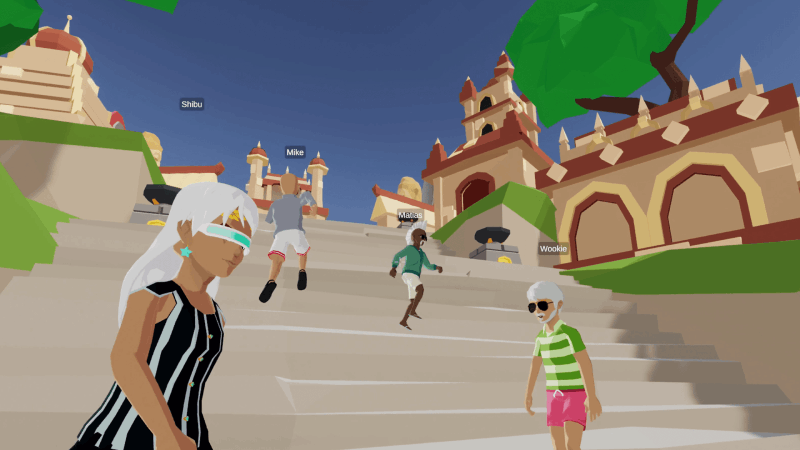 The Sandbox is another virtual world built on the Ethereum blockchain. Players on the Sandbox are able to create, own, and monetise their gaming experience.

Just like with other metaverse platforms, the Sandbox also has its own token known as SAND. The token is used for staking, governance, and transfers.

Does the metaverse have any risks?

Is there a technology that exists without risks? Every technological advancement or creation has come with its own fair share of risks. Therefore, the metaverse is not free from them either.

A common risk that’s being linked to the metaverse by experts is potential disputes on intellectual property, data protection, ownership, content licensing, and risk associated with digital assets.

Another risk is monopolisation. We have seen over the years how various corporations have become monopolies. The internet, for example, was once a relatively decentralised place but is now dominated by a handful of tech conglomerates.

While the idea behind the metaverse is supposed to be the creation of one digital universe, it’s not yet clear if we will end up with “a” metaverse or “the” metaverse.

Should one or a handful of companies end up effectively owning the metaverse, then there is the risk of them gaining certain powers to protect their own vested interests.

Although some of these risks will be experienced once the metaverse is fully functional, identifying them in the early stages of the metaverse’s development could help companies actively build the metaverse to work on finding solutions for them.

Will the metaverse replace the internet?

Metaverse advocates believe that virtual worlds will eventually replace the internet as we will all throw on our VR headsets, turn into our digital avatars, and spend most of our free time in virtual reality.

Whether they are right or not remains to be seen but even if they are correct, it will take a long time for the internet to be entirely replaced by the metaverse.

Will the metaverse be successful?

Should you choose to invest in the metaverse, only invest what you can afford to lose and take the time to research all the investment opportunities that are available.

We hope that or guide on the Metaverse helps you understand the potential investing and trading opportunities. Keep up to date on evolving blockchain trends here!

Cryptocurrency mining is a process by which new blocks of coins are created, a function used by the most well-known crypto, Bitcoin.

What is spot trading in crypto?

Learn about spot trading in the crypto market and how to buy and sell digital currencies at a spot price for immediate settlement.