Charts Of The Week: Equity markets under pressure 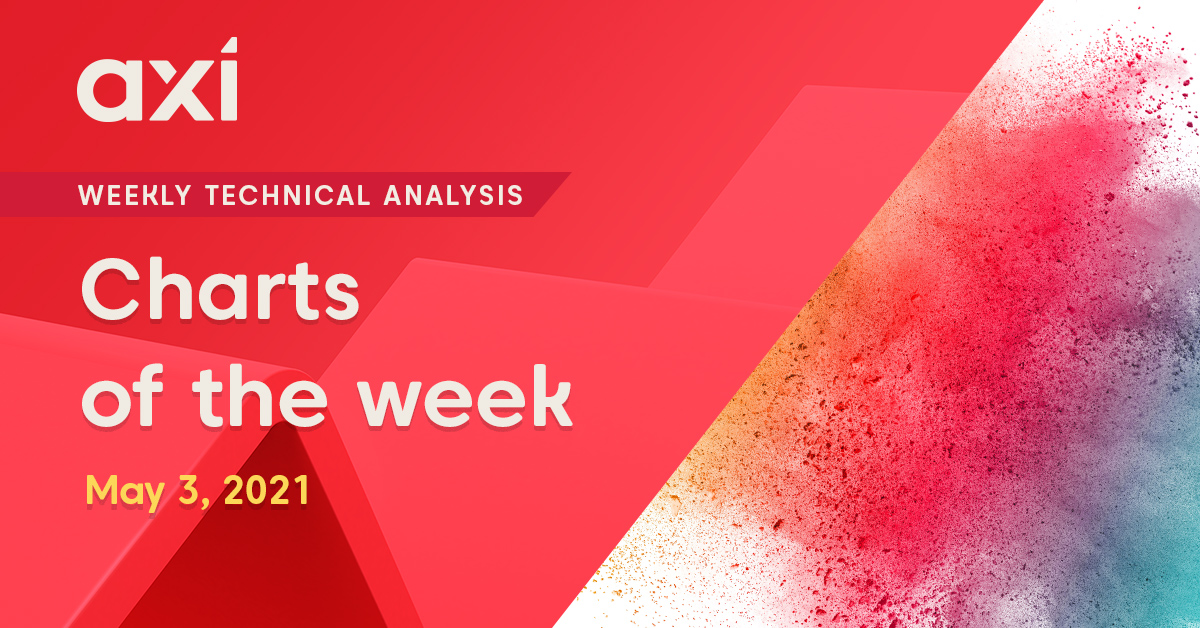 Equity markets came under pressure on Friday, and even a strong earnings season and the Federal Reserve reiterating its dovish stance could not help in preventing further losses. Investors have lingering concerns about the prospect of rising inflation, despite the reassurance from the US central bank. The stock market is already pricing in a strong economic recovery, and fresh catalysts will be needed to push it to new record highs.

Looking at the GER30, it is approaching a key support level at 15,086. A break to the downside is likely to push the index towards 15,000 points – a major psychological support level. Bulls will have to defend this line if they want to keep the upper hand. A clear break below 15k would spell trouble for the index and pave the way for a deeper correction. The next level of support would then lie at 14,936, which is the 23.6% Fibonacci of the December-April rally.

Things are looking a bit better for the USTECH index. However, as the consolidation is dragging on, more investors are wondering if too much good news is already priced in – even incredible earnings figures from major tech giants such as Apple, Amazon and Alphabet failed to push it to fresh highs. Traders are keeping a close eye on the 13,700 support level. Should it fail to hold this time, downside momentum could quickly accelerate and push USTECH towards 13,307 points.

Meanwhile, UK100 traders are also patiently waiting for a breakout. The index is consolidating within a triangle and in case of a breakout to the downside, traders will be looking for the rising trendline from the February low for support.

Gold prices remain under pressure amid renewed Dollar strength. The Greenback came back into demand amid rising bond yields and broad risk aversion in global markets. The short-term outlook for Gold remains mixed. The price of the precious metal fell below the key support level at $1759 on Friday, but finished the trading day above it. Traders will be keeping a close eye on this particular level, as a clear break below would pave the way for a deeper correction until at least $1725.

It remains to be seen whether the current Dollar strength is just a bear market rally or if there is more behind it. The Federal Reserve could not have been much more dovish, but markets are still not fully convinced that rates will stay low as long as the central bank projects them to be. With the April NFP figure being released on Friday, volatility in the FX market is likely to stay high.

Silver is finding itself in a similar position. The topside has been capped at $26.75 and the commodity struggled to gain momentum. A test of the $25 support level and the 200 DMA seems likely in the near-term, and will provide further clues about the resilience of the precious metal.

Gold and Silver are not the only metals that have caught the attention of traders recently – it has been Copper that has stolen the limelight, where rising growth expectations have been driving prices higher. However, there are signs that Copper is overbought in the short-term and the negative RSI divergence on the Daily Chart is a warning sign. Nevertheless, Copper bulls are keen to buy the dips and likely to return in the 4.2970-4.3750 support zone.

The sell-off in Coffee also caught the interest of traders. A pullback seems healthy following the commodity´s sharp increase in the past few weeks. $140.35 will be the first major test for Coffee and should this line of support hold, a continuation of the rally appears likely in the near-term. A breakout to the downside could accelerate downside momentum however, especially with Coffee still looking fairly overbought in the short-term. Traders would then be looking at $135.55 as next key support level.