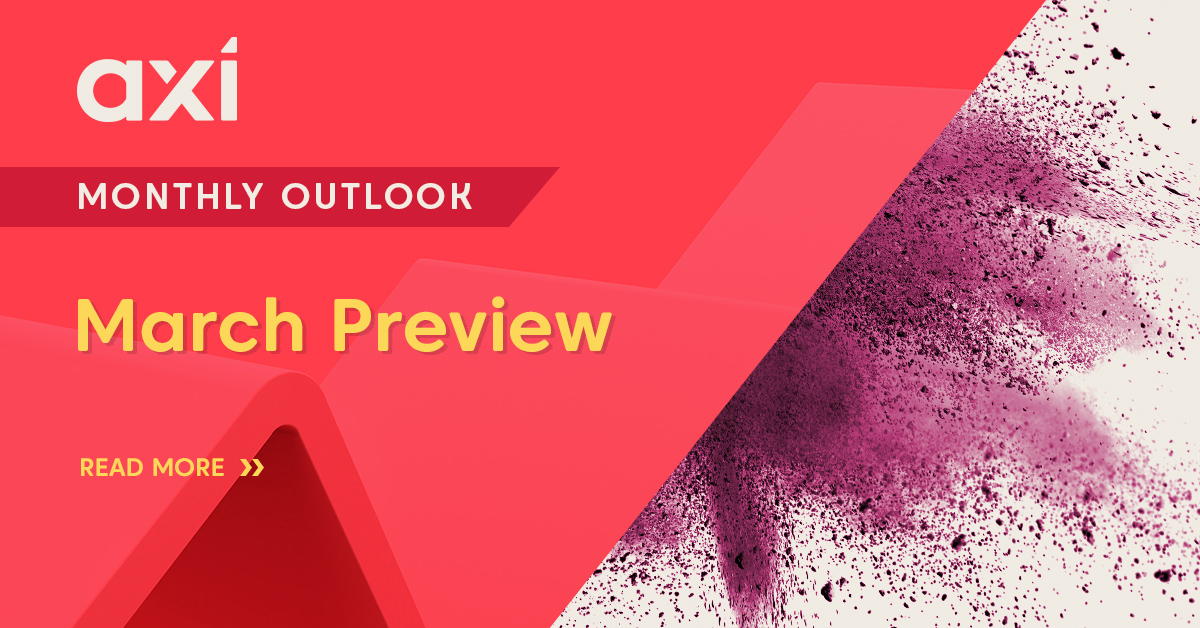 February´s volatility caught some investors by surprise. While the focus at the beginning of the month was on the global vaccination campaign and the stimulus talks in the United States, rising rates brought back inflation fears and ended the stock market´s winning streak.

March is likely to be a volatile month too. There is no lack of events that could move markets, and larger price swings across various asset classes might bring investors and traders who were standing on the sidelines back in the game.

Let´s have a look at the key market themes for this month.

The United Kingdom recently presented a four-step plan to end its lockdown, if several conditions are met. Investors reacted positively to this, and it gave the British Pound another boost. While it is obvious that the situation remains unclear and that the new COVID-19 variants could complicate matters even more, it was welcome news as it gave hope for a gradual return to normalcy.

Presenting such an exit plan is risky. Should the coronavirus crisis take a turn for the worse, the government might need to alter or abandon it altogether, which would further damage consumer confidence. On the other hand, it can boost confidence as there appears to be a strategy instead of a back and forth of opening the economy up just to close it down again after a few weeks.

Joe Biden´s long-awaited stimulus package might finally arrive this month, although Democrats are facing an uphill battle in the Senate. Equity markets have priced in a lot of good news already, but should the stimulus bill be signed off, it is likely to underpin the rally. On the other hand, should Biden fail with his plan, a sell-off seems increasingly likely.

Amongst traders, there is already talk about a new commodities supercycle - an extend period of rising commodity prices. It is not just Oil that had a stellar performance since the beginning of the year - Copper, Sugar and grains are also on the rise. Inflation fears also means that commodities become more attractive as inflation hedge. However, some commodities are starting to look heavily overbought from a technical perspective, and the continuation of the rally will largely depend on the pace of the global economic recovery.

Increased confidence in the global economic recovery has led to speculations that the US central bank might tighten its policy earlier than expected. Global markets were rattled by a sharp spike in bond yields and left investors nervous. Verbal intervention from multiple central banks - including the Fed and the ECB - stabilized the bond market, but inflation concerns are likely to persist in the near-term. The stock market rally has been primarily driven by stimulus measures and central banks keeping its floodgates wide open. Should global yields continue to rise, the sell-off in the stock market might intensify.

What are the charts signalling?

GBPUSD had a remarkable rally since the beginning of the year, and despite the recent setback, a continuation of the uptrend seems likely. The UK is benefiting from a successful vaccination campaign and the lockdown exit plan has further boosted confidence. Traders are keeping a close eye on the 21 DMA, which previously acted as key support. A clear break beneath the line and the 1.3750 support level could be a first hint of trouble for GBP bulls. However, this seems less likely as broad USD weakness is likely to return.

The Australian Dollar could be one of the winners if risk appetite continues to stabilize and commodities resume their rally. AUD/USD is currently trading within an ascending channel and the key levels to watch are 0.7690 to the downside and 0.7855 to the topside.

EUR/GBP does look oversold in the short-term, but both technicals and fundamentals are signalling that the downtrend is far from over. Traders will be keeping a close eye on the 0.87 level - the 23.6 % Fibo of the Dec-Mar decline and near the 21 DMA.

Both the Weekly and Monthly chart are signalling that USOIL is heavily overbought. However, the rally is so far not showing any signs of weakness, and going against the trend could be dangerous given the strong fundamentals. Traders might want to keep an eye on the 21 DMA, which proved to be a significant support line in the past few months. A clear break below could signal that USOIL might see a short-term correction. The key levels to watch are the psychological support level at $60, followed $57.35.

Copper is another commodity that has seen remarkable gains since the beginning of the year. Overbought market conditions have slightly eased, and Copper saw a healthy correction. The key level to watch is the 38.2 % Fibo of the Jan-Feb rally, which lies around $4.0360. As long as that level of support remains intact, bulls will keep the upper hand.

The German index (GER30) is struggling to gain momentum. Even with a continuation of the record rally on Wall Street, the DAX will unlikely be able to catch up. A slow vaccination program has European investors concerned, and the gap between EU equities compared to their US counterparts is likely to widen. The GER30 might be interesting for traders looking to trade the range as the index has been consolidating between 13.600 and 14.200 points for quite some time.