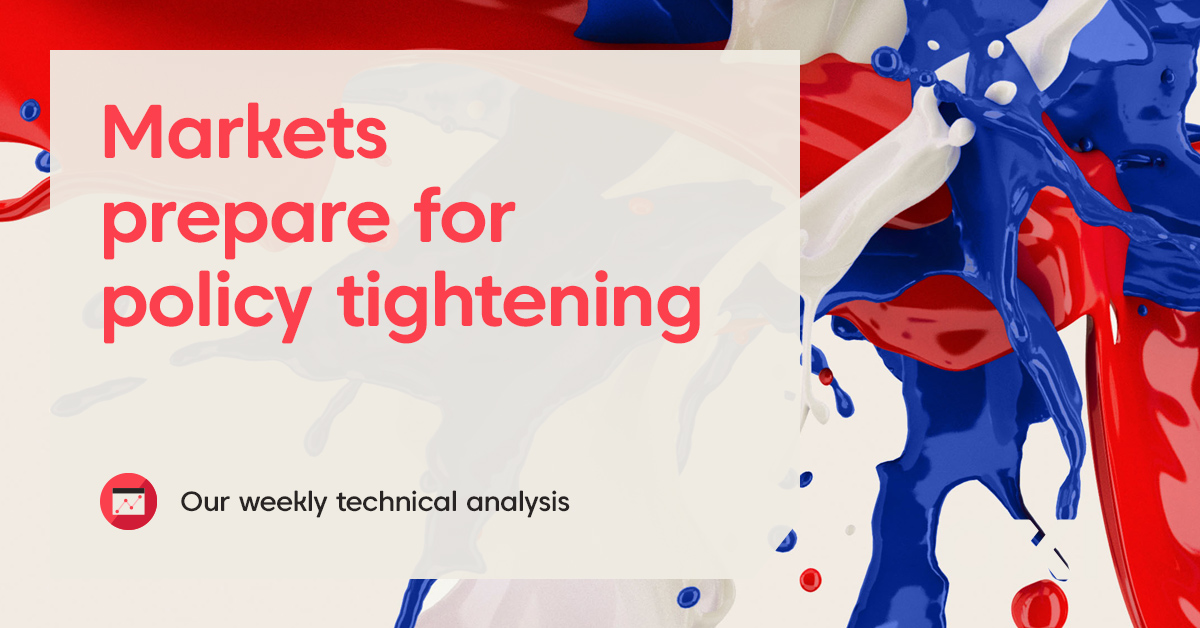 A rate hike by the Fed is unlikely to occur this week, but there are likely to be hints that this could follow in March. COVID-19 cases appear to have peaked in the U.S. and the Omicron variant was less severe as initially feared. This, along with an economy that is running hot and an inflation rate near 40-year highs, will give the team around Fed Chair Powell a good reason to pave the way for policy tightening.

The Bank of Canada will decide on Wednesday whether it will increase interest rates for the first time since the pandemic started or keep them unchanged. The market is expecting a 25-bps rate hike, and this appears the most likely scenario as inflation remains at elevated level, the economy is performing strongly, and the labor market is looking healthy. A 25-bps rate hike would not surprise the market, and the initial reaction could therefore be muted. Whether the Canadian Dollar can extend gains will primarily depend on the comments from the BoC and its outlook.

Traders looking to buy the Canadian Dollar might want to avoid going long CAD against one of the safe havens as markets remain in risk-off mode. AUD/CAD is worth keeping an eye on as a hawkish BoC could push the currency pair below 0.8970 support, which might signal a continuation of the downtrend towards 0.88 (the 61.8% Fibo of the March 2020-February 2021 rally).

Geopolitics in the spotlight

Risk aversion has increased as Russia-Ukraine tensions continue; Russia states that it has no plans to invade Ukraine, but the United States and its allies think otherwise. Talks between U.S. Secretary of State Blinken and his Russian counterpart Lavrov have not yielded any results, which didn´t come as a surprise.

In FX, traders are rushing into safe havens. The Japanese Yen and Swiss Franc are in demand, and we could soon see another test of the recent low in EUR/CHF. A break below 1.0320 support could intensify the selling pressure and push the currency pair towards the next major support level at 1.0225 – a level it hasn´t been trading at since 2015. The Daily RSI has not entered oversold territory yet, suggesting there could be further room to the downside.

Bond yields are rising and investors are preparing themselves for the Federal Reserve´s expected policy tightening. The technology sector was again the one that has been hit the hardest, and with the U.S. earnings season just around the corner, volatility will remain high. Strong earnings could potentially prevent a deeper correction in the NASDAQ. On the other hand, disappointing figures would hit the sector even harder given the current risk-off sentiment.