Home / Blog / Education / What is OPEC

What is the Organisation of Petroleum Exporting Countries (OPEC)? 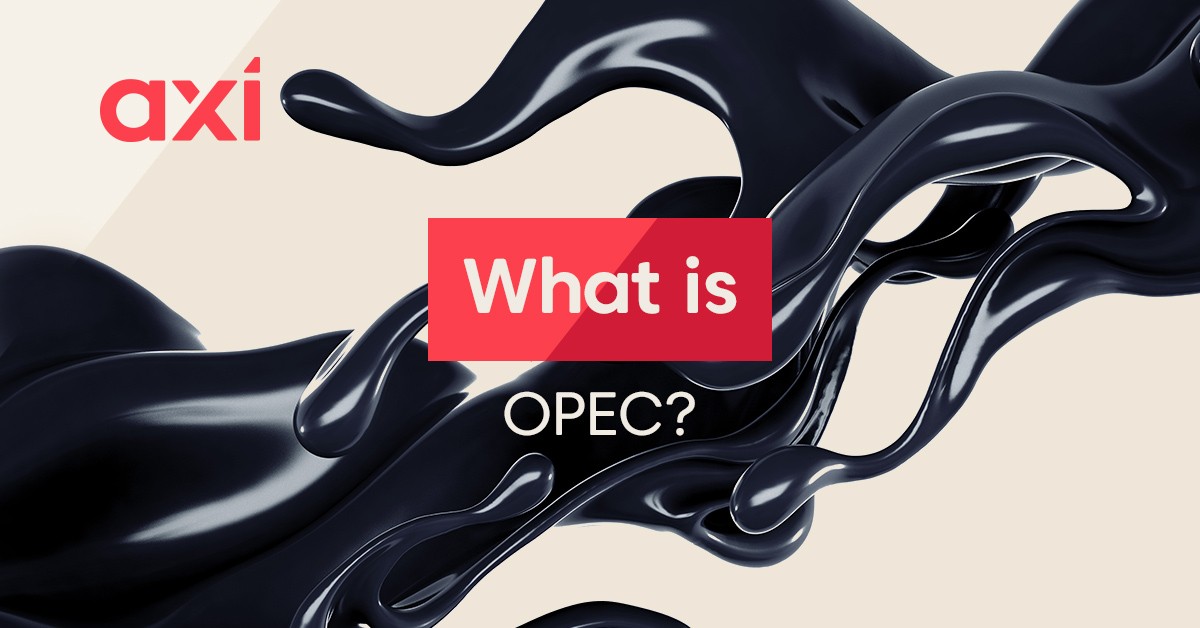 The Organisation of Petroleum Exporting Countries (OPEC) is an intergovernmental organisation made up of 14 countries, all of which are either major oil producers or have a significant stake in the oil industry.

The members of OPEC co-ordinate and unify the petroleum policies together, and ensure that all participants in the oil market act in accordance with the shared interests of OPEC as a whole. Trader's who are interested in oil trading should be eager to understand how the OPEC operate and learn about the actions taken from OPEC meetings.

In this article, we will cover everything you need to know about one of the most important intergovernmental organisations in the world. Continue reading to learn more about OPEC's history, purpose and impact it has on global markets.

What is the OPEC (Organisation of Petroleum Exporting Countries)?

The Organisation of the Petroleum Exporting Countries is an intergovernmental organisation of 13 member countries, originally founded in 1960 in Baghdad. OPEC was established to coordinate the oil production policies and improve cooperation between its member states. The organisation has a major influence on global oil prices. Shortly after the significant decline in oil prices in 2014 to 2016, OPEC+ was formed to help the organisation expand its influence across the global oil market.

Who is the secretary of OPEC?

The current Secretary General is Mr. Mohammad Sanusi Barkindo from Nigeria. Previously, he worked for the Nigerian National Petroleum Corporation (NNPC) for more than 24 years.

What is the purpose of OPEC?

According to the statute of OPEC, its mission is to:

"Coordinate and unify the petroleum policies of its member countries and ensure the stabilisation of oil markets in order to secure an efficient, economic and regular supply of petroleum to consumers, a steady income to producers and a fair return on capital for those investing in the petroleum industry."

In other words, the cartel attempts to manage the supply of oil in order to influence the oil price in global markets. OPEC also provides the public with a significant amount of information about the global oil market.

OPEC was founded in 1960 at the Baghdad Conference, which was attended by Iran, Iraq, Kuwait, Saudi Arabia and Venezuela. The organisation initially had its headquarters in Geneva, Switzerland but moved it to Vienna, Austria five years later.

OPEC's influence increased significantly in the 1970s as more member countries took control over their petroleum production. The were two major oil crises in that decade. It started with the 1973 oil crisis when OPEC members announced an oil embargo. The embargo was aimed at countries that supported Israel during the Yom Kippur War.

This was followed by the 1979 oil crisis when the Iranian revolution led to a sharp decline in global oil production. The Iran-Iraq war started in 1980 and further reduced the global oil supply.

OPEC went through a turbulent time in the 1980s as prices collapsed in the second half of the decade. Oil prices remained at lower levels during the 1990s, but saw a massive bull run that started in 1999 and only ended in 2008 when the world economy faced the Great Recession.

Oil prices recovered steadily, only to crash again in 2014. Between 2014 and 2016 we saw one of the largest oil price declines in history. The reasons behind the crash were the booming U.S. scale oil production and a decline in global demand.

The recovery that started in 2018 didn't last for too long. The Russia-Saudi Arabia oil price war in 2020 and the COVID-19 pandemic led to a dramatic price crash that saw oil prices entering negative territory.

The pandemic and the lockdowns that were introduced in many countries across the globe in March 2020 led to a significant decline in oil demand. Oil companies were forced to rent tankers to store their surplus of oil, which pushed the price of the commodity into negative territory - something never seen before.

In early 2022, oil prices reached a multi-year high. The world economy recovered much quicker from the effects of the pandemic than initially expected, as did the demand for oil. Geopolitical tensions also played a key role.

Who are the OPEC members?

The founding members of OPEC are:

Iran: Iran's oil production level sits at a 40-year low based on data from the EIA. International sanctions against Iran and the economic crisis that intensified with the emergence of the pandemic have prevented a recovery.

Kuwait: Kuwait is a major oil producer and the local economy has benefited significantly from it. According to the World Bank, oil production made up 42% of the GDP in 2019.

Venezuela: Venezuela has the largest amount of oil reserves in the world. Despite that, a collapsing economy and international sanctions have crippled its oil industry.

The following countries joined OPEC at a later stage:

Out of those countries listed, the following have since left OPEC:

This leaves OPEC with a total of 13 member countries.

Recommended reading: What is oil trading?

OPEC+ is a term used for a group of 23 oil-producing countries, made up of all OPEC members and 10 non-OPEC members. The alliance between OPEC and non-OPEC oil producers was formed in 2016 in Algeria. OPEC+ gives the organisation greater control over the oil market, as the alliance controls more than 55% of global oil production.

Russia plays a significant role in the alliance, with the country being the world's second-largest oil producer, only behind the United States.

The non-OPEC countries that form OPEC+ are:

What is the OPEC meeting?

The OPEC holds regular meetings. The most important one is the ministerial meeting, which occurs at least twice per year, but more frequently if needed. Each member country represents one vote. The chief executive of OPEC is the Secretary General.

The meetings can have a strong impact on the global supply of oil and the oil price. Traders should be aware of the most current meeting and upcoming events as the oil production quotas are outlined by the OPEC member states during these sessions.

What happened at the last OPEC meeting?

The last OPEC+ meeting occurred on February 2nd in Vienna, Austria. The group announced a further increase in oil output, increasing it by 400,000 barrels per day for March.

OPEC+ has been steadily ramping up production over the past few quarters. This comes following a drastic cut in oil production in April 2020, as the COVID pandemic led to a collapse in demand.

However, the economic recovery has been accelerating rapidly, and the cartel is facing additional pressure from importers who are calling for larger output hikes.

Meanwhile, OPEC+ remains hesitant to boost output by too much, as uncertainties surrounding the economic recovery remain high.

OPEC’s World Oil Outlook (WOO) is a publication that, according to OPEC, intends "to highlight and further the understanding of the many possible future challenges and opportunities that lie ahead for the oil industry".

The World Oil Outlook is drafted using the knowledge of the OPEC Secretariat, professionals in OPEC member countries and the Organisation's Economic Commission Board.

OPEC provides the most recent WOO and archive with all their annual World Oil Outlook reports on their website here.

OPEC started this publication in 2007 and the last edition was released in October 2020.

Discover the advantages and disadvantages of the Organisation of Petroleum Exporting Countries.

How does OPEC affect oil prices?

OPEC members agree on how much oil to produce, which gives them power over the price of oil. While the long-term effect that OPEC has on the oil price is limited, it can have significant impact in the short-term.
OPEC members benefit from high oil prices, as it means more revenue from them. At the same time, the member countries do not wish to decrease supply by too much, as that could actually hurt revenues down the line.

On the other hand, OPEC might decide from time to time to boost oil production. This can happen when certain member states fail to keep their production at normal levels. At the moment, OPEC is finding itself in a output hike cycle, as the pandemic led to a dramatic cut in oil production.

Ultimately, the oil market is driven by supply and demand, as any other market. However, OPEC+ can have a significant impact on the market, especially in the short-term, given the large percentage of the global oil supply under their control.

The United States is not part of OPEC.

While the United States has seen a boom in its energy sector, it also remains one of the world's largest oil consumers, and still keeps importing it too. And while the U.S. production can have a noticeable impact on the price of oil, OPEC+ ability to distort the oil market remains unparalleled.

The U.S. is highly unlikely to ever join the organisation, especially since its relations with some of the member states such as Iran and Venezuela are bad.

By learning about how the OPEC operates, it will help you better understand the oil markets. To start trading oil with Axi today, click here.

Gold is one of the oldest traded commodities. Despite its age, there are traders who are still unsure about trading it, so here are the essential gold trading strategies for all traders.

Gold trading for beginners - How to trade gold in 2022

Dive into the gold market and learn how to take full advantage of the gold price fluctuations as a new trader.